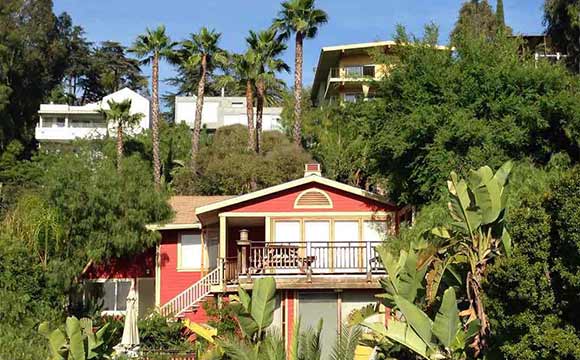 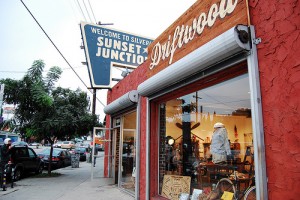 Silver Lake is a residential and commercial neighborhood in the central region of Los Angeles, California, but locals consider this a “happening” east side neighborhood and who can blame them? You can Search MLS Listings and homes for sale right here.

Silver Lake is built around a city reservoir, which gives the district its name. The “Silver” in Silver Lake is not because of the water’s color, but named for the local engineer who built the reservoir. It is known for its neighborhood restaurants and bars, coffee spots, vintage and boutique shops, and hip sense of community. The city has also become home to many notable television personalities, musicians, writers, and hipsters alike. Silver Lake is also known as one of the Eastside of Los Angeles’ hippest neighborhoods.

Other boundaries include the Los Angeles River between Glendale Boulevard and Fletcher Drive and Riverside Drive on the northeast, the Glendale Freeway on the east, Effie Street, Coronado Street, Berkeley Avenue and Fletcher Drive on the southeast, the Hollywood Freeway on the south, Hoover Street on the west and Fountain Avenue and Hyperion Avenue on the northwest.

The prime Silver Lake real estate around the lake, is known by us realtors, as the “Moreno Highlands.” However, there are plenty of desirable areas in and around the Silver Lake neighborhood, including around the Hyperion Ave shopping stretch, and the up-and-coming older residential south of the boulevard.  Silver Lake is one of LA’s most walkable and bikeable ‘hoods with (almost) everything conveniently within walking distance along the neighborhood’s “downtown,” Sunset Boulevard.

Culturally, Silver Lake has had a reputation for being home to artists, musicians, writers, creatives, and unique in its acceptance of racially, and ideologically diverse groups, as well as a politically progressive community.

The home ownership in the area seems to be long-term owners, and artists of sort who have lived in Silver Lake many years. Young professionals have been drawn to the area for its “bohemian modern” lifestyle and are bringing with them new alternative businesses, art/architecture and studio establishments, and local yummy dining scenes.

Schools in and around the Hollywood Hills from GreatSchools.org.

Find your local public or charter school with the LAUSD Resident School Identifier. 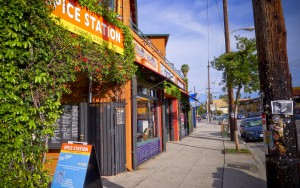 In the 1970s, the Silver Lake, CA was a center for Los Angeles’ gay culture. The combination of affordable housing, a bohemian ambiance and promotion by gay real estate agents caused the gay and lesbian population to swell. Neighborhood bars Harry Hay’s Mattachine Society and the Black Cat were thought to be the originating points of the gay rights movement in Los Angeles.

Since about 2000, gentrification has intensified in the neighborhood, including the opening of many stylish independent boutiques, coffee shops, fitness studios, and restaurants. If you purchased property in Silver Lake around this time you, my friend, are what I consider a lucky duck! There are three main commercial strips within the neighborhood – Sunset Boulevard, Hyperion Avenue, and Silver Lake Boulevard. Many say the heart of the community is at the junction of Sunset and Santa Monica Boulevards, named Sunset Junction, and home to the festival by the same name that ran from 1980 to 2010.

Shopping in Silver Lake, CA is just as eclectic, with everything from vintage clothing, throwback record shops, Motorcycle Garages, farmers markets with local artisanal products, retro/mid-century modern furniture shops, and so much more! 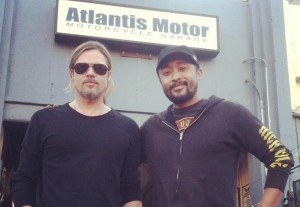 Atlantis Motor Garage is the perfect retreat and poster child for local Silver Lake hardcore & salt-of-the-earth motor enthusiast. You can score a quality rebuilt bike, have then team create something original, or pick up some stocking helmets, riding jackets, tees & other biking supplies. Plus, owner and local Silver Lake bad boy John Q promises for more “East Silver Lake” events at his spot. The verdicts out on what that means…But sign me up.

Read more on our exclusive interview with John Q on his Brad Pitt experience at Silverlakeblog. 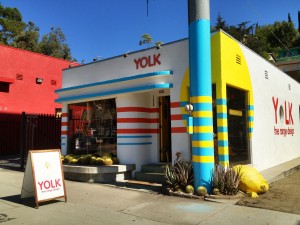 Looking for some unique gift ideas or hard to find trinkets? Yolk of Silver Lake might be the perfect spot. It’s a fun little boutique in the heart of Silver Lake Village. It’s stocked with a selection of kids’ clothes & toys, plus Scandinavian-style gifts, decor & more. Read more at Silverlakeblog’s exclusive interview. 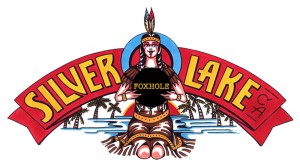 A local hole-in-the-wall denim collection vintage apparel shop embracing the best of Silver Lake culture. Find one of a kind pieces out of vintage & recycled denim upon request. The owner Fox repaired my favorite denim jeans like new.

Check out the exclusive interview with Silverlakeblog. 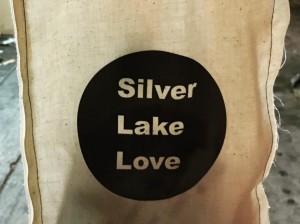 Silver Lake doesn’t have a shortage of non-profits and individuals inspired to give back to then community. Take Silver Lake Love, a local nonprofit addressing the overlooked causes of homelessness. Check out the exclusive interview with Silverlakeblog. 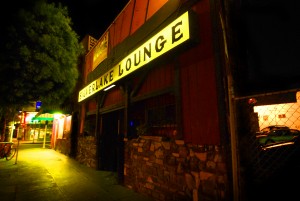 Silver Lake, known as one of the city’s hippest neighborhoods, has many bars, nightclubs and restaurants.

Since the 1990s, Silver Lake has become the center of the alternative and indie rock scene in Los Angeles. The neighborhood was home to two major street festivals each year: the Silver Lake Jubilee, held in May and the Sunset Junction Street Fair, held in August. The last festival was held in 2010. The Silver Lake Jubilee, a more recent addition, featured live music by local musicians, local artists and community businesses. It moved out of the neighborhood to private grounds near the Los Angeles River and changed its name as of 2013.

Surprising to some, music runs deep in Silver Lake. It is home to various independent record labels and music studios including Dangerbird Records, Epitaph Records, Avatar Records, and Beggars Group. The Silver Lake Conservatory of Music, established in 2001, provides another outlet for local musical talents to develop themselves.

Silver Lake is often referred to as the “Williamsburg of the West” due to the growth in the indie rock music scene and it’s characteristics similar to New York City’s hip neighborhoods. Many of the local spots are rehabs of former dive bars, previously and mostly inhabited by gay, latino, and artists types. Whether you’re headed to Los Globos for some dancing, Akbar for a cocktail, or the Good Luck Bar for a casual encounter, there’s a bit of everything here – and you can find the breakdown right here! 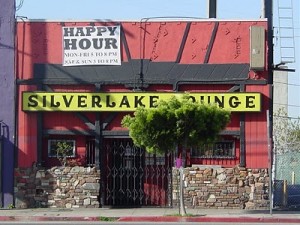 If you’re looking for a true Eastside Silver Lake Experience look no farther. Silver Lake Lounge is a no-nonsense, cash-only institution showcasing local indie rockers, plus comedy & drag queen nights. So if you like stiff drinks and a no frills atmosphere, you’ve come to the right spot. 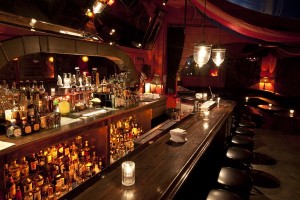 A more intimate spot where you can actually hear a conversation is 4100 Bar. This is a chill-out spot pulling in more locals and visitors with their word-of-mouth handcrafted cocktails, inviting couches & intimate atmosphere. This spot is a must if you’re in this part of Silver Lake and looking to unwind. 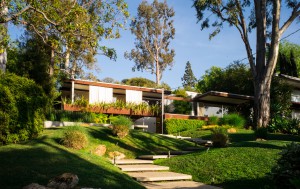 Aside from the Silver Lake reservoir itself, Silver Lake real estate is known for its impressive collection of architectural gems – everything from Spanish Mediterranean to Mid-Century Modern and newer architecturally stunning residences. Many now-famous architects were commissioned to build Real Estate in Silver Lake (some actually living in a few of them) including Neutra, Schindler, Lautner, Wright, and Ain, to name a few. These homes challenged traditional principles of design and spatial characteristics of their time, with a more modernist experimentation, and still today sit majestically atop the beautiful hillsides or sit cozily on unassuming streets.

Take a drive through the Silver Lake hills to see representatives of Tudoresque, Chateauesque, Mission Revival, Streamline Moderne, and other eclectic styles. There are more architecturally significant homes per square mile in Silver Lake than in other area of Los Angeles, making Silver Lake Real Estate a rare commodity!

Silver Lake was home to many early motion picture studios – it was all here way before Hollywood! The area of Silver Lake on Glendale Blvd starting at Rowena and extending down into the Echo Park area near Sunset Blvd was known as Edendale.  It was home to the early Sennett and Keystone silent movie studios, and the site of many movie firsts, including Charlie Chaplan. 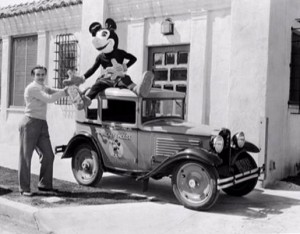 During the 1930s, Walt Disney built his first large studio in Silver Lake at the corner of Griffith Park Boulevard and Hyperion Avenue, which is now the site of Gelson’s Market. As consequence, the name “Hyperion” is of great significance to the Walt Disney Company, with many company entities carrying the name, such as Hyperion Books and the Hyperion Theater in Disneyland, how awesome is that little piece of triva?

There are almost 50 public staircases in the Silver Lake area that crisscross up and down the signature hills that were mostly built for access to the long-gone Red Car trollies. Among these are the Descano Stairs, the Redcliffe Stairs, the famous Laurel and Hardy short film “The Music Box” (aka. The Music Box steps) was filmed here, and familiar comedy trio, The Three Stooges stared in “An Ache in Every Stake” filmed in 1941 on the stairs just off of Cove Avenue.

The area was originally named “Ivanhoe” before the turn of the Century by a Scotsman named Hugo Reid, who thought the rolling hills reminded him of his homeland Scotland. He named the area after a famous Scottish novel Ivanhoe, by Sir Walter Scott. This is why you’ll notice many of the street names in the neighborhood are Scottish or names of characters of the novel such as Herkimer, Rowena, Kenilworth, Ben Lomond, Hawick, St. George, (that’s a fun scavenger hunt!)

In the Silver Lake community lies the namesake reservoir composed of two basins, with the lower named Silver Lake and the upper named Ivanhoe. The lower body of water was named in 1906 after the commissioner, and the upper body received its name after the Ivanhoe novel.

By the 1920’s and 1930’s, with the growing number of residential developments, and the equally growing movie industry, city planners saw the development opportunities and started making the investments in underground utilities and cement streets. One of the most notable developers was the silent film star Antonio Moreno (the Moreno Highlands) whose development projects resembled Mediterranean villages he visited.   This landmark home, the Canfield-Moreno Estate set the architectural tone for many of the homes on the west side of Silver Lake by the reservoir hills.

Besides Silver Lake, the reservoirs are owned and maintained by the Los Angeles Department of Water and Power and could provide water to 600,000 homes in downtown and South Los Angeles, holding 795 million gallons of water! Only the smaller of the two however, Ivanhoe, remains online.

The reservoir is a focal point in the Silver Lake community and has evolved as a regional recreational resource, which includes the Silver Lake Recreation Center, and the adjacent city park and popular dog park; the Silver Lake Walking Path, (stretching 2.25 miles around); and the Silver Lake Meadow, modeled after N.Y.C.’s Central Park Sheep Meadow. On the northeast corner of the property is the Neighborhood Nursery School, which since 1976 has been at the corner of Tesla Avenue and Silver Lake Boulevard. It is a parent participation cooperative preschool, affiliated with the California Council of Parent Participation Nursery Schools.